I am not a scientist, but I do enjoy facts about our planet, and all of it’s molecular wonder.

I would never try to make you believe I knew squat about science. 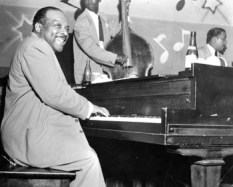 of notes from his keyboard, and flick them into the air like floating atoms around the room.

Basie was a master piano player, but what he seemed to understand most was the silence between each note. The pause between each cord was arousing. The anticipation between each key he played made your heart beat in time with the music. Sometimes your heart sounds would even fill the space between each strike of the ivories.

You couldn’t help but to be drawn to him, and that casual and easy presence he had on stage.

However, there was nothing easy about the Count’s style.

Basie started out in Harlem in the early 1920’s, worked his way through Texas and Oklahoma and finally found his way to the home of his musical sound: Kansas City.
He put together a style that spotlighted jump beats, and with a group of musicians, like Lester Young and Dickie Wells,he would riff the night away playing one “head arrangement” after another until they became standards.

The Count made it easy for us to begin the transition from swing and dance beats to bebop. He still let us swing, but we were doing it way that no longer fit into the traditional Goodman or Miller era. The music we were now setting the needle down on wasn’t dance music. This was something we had to listen to with of our heart and soul, and less with our feet.

Here’s an example of Basie letting the notes rest. Off of his 1958 Basie (or E=MC2), here’s the final  seconds of Splanky.  He’s got the big band swinging, and then with a few seconds  left  he interjects just a few quick shots to let the critical mass of listeners know it’s time to stop.

Count Basie’s music was light as air, and tough the New Jersey shores  he was born near.  I don’t pretend to understand science, but when I hear Count Basie play I hear a musician who took the minimum amount a person could play on the piano, and gave it a communicative value that the masses loved.

⇒  to look forward to as certain :  (anticipate)